On Friday, May 18, 2018, I flew my glider for the very first time. Prior to take-off, I went through the entire spectrum of emotions: fear, excitement, doubt, anxiety, happiness,... you name it! Although I had flown 8 different models of gliders over the course of 5 years, I was totally freaked out by the idea of flying this light sailplane and making it safely through the tow and back onto one of the three grass runways of our Club.

John and I spent a couple of hours washing both of our vintage ships and preparing the radios and other electronic devices. We then walked them out to runway 08. Luc Savoie walked by and said, "Hey! There's Mini-Me!" The L Spatz-55 does look like a mini version of the Ka 7.


Before I was going to to take my single-seat glider up, I went on a flight with John in the Ka 7. This allowed me to practice side slipping and complete my first flight of the season since my check out last Sunday. This also gave me the confidence that my skills were adequate. The weather was ideal: 8-10 knot winds, blue sky, 17¡C and all the high-performance ships competing in MayFly were far away from the field.  Our flight in the Ka 7 was great! My boyfriend/instructor checked me out and confirmed I was ready to go.

Moments later, I was sitting in my very own glider, on the flight line doing my checks. For several minutes, I was a nervous wreck... I had to ask John to leave me alone a few minutes and although the tow pilot was ready to go, I thought of every piece of advice I had received over the years... "if you need more time, if you want to take several minutes to do all of your checks and check yourself internally, by all means, do it!" So, I did. I sat there breathing deep and after an emotional moment of tears rolling down my cheeks, I finally realized that I was ready. I wanted to fly my ship and take her soaring high above the ground. I called upon John and gave him the thumbs up. He passed me the canopy and I locked myself in. 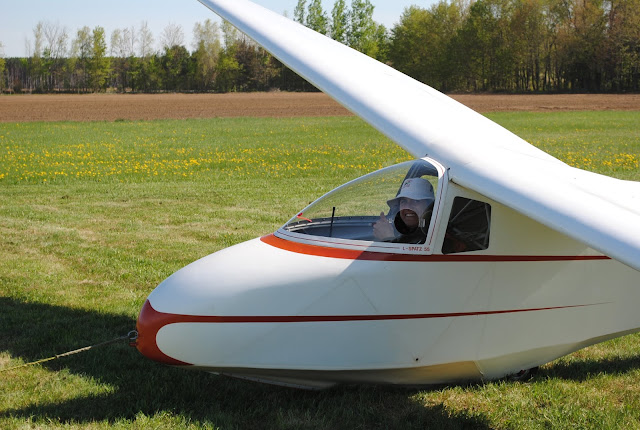 The tow was uneventful yet very different than any other tow. This sailplane weighs a total of 585 lbs. with me and my parachute on board! But its wing span is 15 metres! So, the tow pilot has to keep the speed at 60 MPH not a notch above and even then, I had to side slip or skid continuously to keep the rope tight.

At 2400' AGL, I released and began flying my little ship. What a great feeling! I screamed "Wooo-hooo!" at the top of my lungs and went back to find that thermal I had just felt... I soared up to 3500' and flew level for a bit. John had planned to take-off again in the Ka 7 to join me in the air. I stayed around the field thermaling here and there to wait for him and then watched him take-off behind the tow plane. 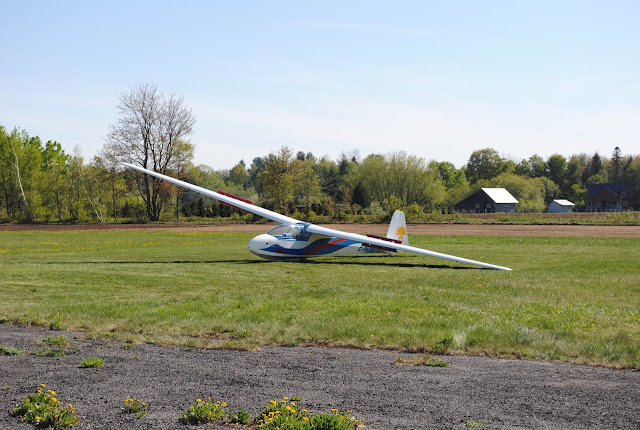 Within 5 minutes, we were soaring together in the same thermal. John had brought along our Nikon D3000 camera and took some great shots! I felt like a Million bucks! My man and I were both flying our vintage ships together in a thermal at 3000'! How many couples get to say that!?!?! 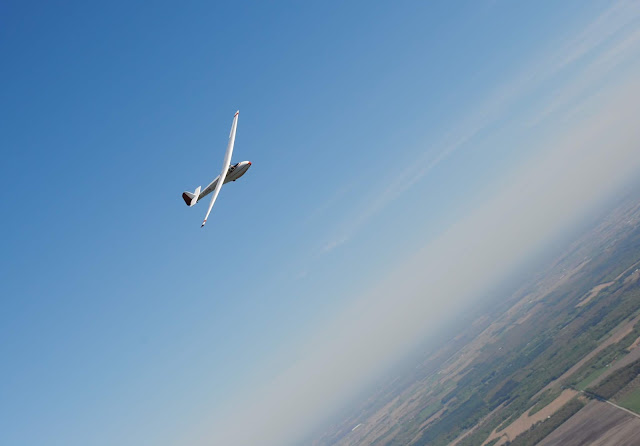 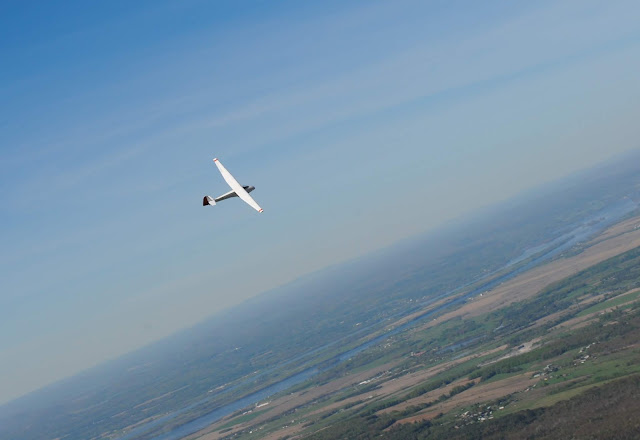 Once I was ready to bring her down, my anxiety shot up ever so slightly because of all the warnings I had received (the spoilers on the L Spatz-55 aren't very effective, but the rudder authority is unbelievably strong. So, if you're willing to accept that every landing will involve side slips, you're home free). So far, my flight with her was going extremely well, so, within seconds, the anxiety was replaced with confidence. I prepared a circuit for runway 08, but simultaneously, a couple of pilots competing in the MayFly had just called in their intentions to land on the same runway. I called in my changed intention and chose to land on runway 13. I side slipped on my turn to base, and side slipped again on final with a full stop 50 ft. short of the P-patch. I had heard another pilot saying he was landing short on 13 as well and didn't want to be in his way – I wanted to land longer, but under-estimated how quickly she stops.

Needless to say, I stepped out of C-FFAG with a huge smile on my face and bent over to give her a big kiss on the nose! I am now looking forward to completing my Silver Badge with her and hopefully even my 150km badge prior to July 1st, 2018.

So, gents and ladies, get ready to see a tiny red and white vintage ship up in the skies and hear SG on the radio!

P.S. Thank you, Sam Michaud, for taking the time to teach me how to rig her, for providing me with pictures and the full story of her life. Thank you, Don Henry, for giving me the insight and also helping with the rigging. I feel really blessed to own this 55 year young ship!